Church bells chime in an ancient bell tower as architect and amateur sleuth Jordan Mayfair, from Savannah, Georgia, and her travel-writer uncle arrive at Convento di Santa Francesca Firenze in Florence, Italy. Jordan expects the 15th century convent with its exquisite gardens to offer a safe and serene retreat from the crowded, bustling, touristy district of Europe’s premier Renaissance city, and anticipates a romantic interlude with Paul Broussard, charming patron of the arts, who is flying in from Paris, just for her.

But the polizia municipale are on site, investigating a burglary by jewel thieves, and a mugging has occurred outside the convent walls. Several guests of the convent are not who they seem to be, and one is soon dead. A suicide, the police say. Jordan suspects murder.

Her attempt to find justice for the victim leads her to discoveries as dark as the labyrinths of the convent that she explores with an architect’s eye, and as far-reaching as the spectacular Tuscan hills. But Jordan’s findings give little comfort as she uncovers the truth about Paul’s unstable daughter, Bella, who has come to Florence with evil intentions. In the third book of the Jordan Mayfair Mystery Series, treachery threatens Jordan’s relationship with Paul, tears a prominent family apart, and takes an innocent life.

Get a sneak peek and listen as Phyllis reads an excerpt from Treachery in Tuscany.

KATE FALVEY, EDITOR, 2 BRIDGES REVIEW – “There are plot twists and intrigue, family secrets and rivalries, a debonair lover, a delicious locale and all the usual accoutrements of the satisfying travel cozy, but Phyllis Gobbell gives the proceedings her own particular spin.”

Meadows, hedgerows, and tree-lined lanes welcome Jordan Mayfair to County Tipperary, Ireland. She’s accompanied once again by her uncle, travel writer Alexander Carlyle. Their destination is the charming little town of Thurles, where old friends Colin and Grace O’Toole own Shepherds Guesthouse Bed and Breakfast. But on their arrival, the rural peace at the B&B has been disturbed by the search for a missing toddler, and the secrecy surrounding Little Jimmie’s disappearance and safe return sets the tone for their stay at Shepherds.

While Alex visits the spectacular sights in the region for his travel guide, Jordan is drawn into the local drama. From the warm and welcoming B&B to the traditional Irish pub, Finnegan’s, where music is “the very air that we breathe,” the guests and locals harbor secrets that put Jordan at risk. Colin and Grace have secrets of their own. Their unstable daughter, Bridget, may be charged with the murder of a well-respected doctor. Bridget, Little Jimmie’s mother, has run away to the woods to the cottage of an old woman named Magdala, a believer in leprechauns and fairies. Jordan’s visit to the cottage alerts her architect’s eye, and her discovery of a priest hole will eventually put her—and Alex—in the most perilous situation yet.

Excerpt from Secrets and Shamrocks:

“Tell us the rest of the story, Ian,” Alex urged.

He began, and as before, his voice took on the lilt of a storyteller. “The story goes that one day some of Cromwell’s men intercepted the priest as he was leaving after he’d said the mass, and they went back and dragged the man from his cottage because he’d been hiding the priest. The daughter rushed after her father, screaming and crying. One of the soldiers raised his weapon and shot her. She fell, clutching her breast, and there she died, under an alder tree. Legend has it a patch of shamrock plants sprang up from the ground where her blood soaked into the earth.”

It was a long moment before Alex spoke. “A powerful story.”

And then a shot rang out.

KIRKUS REVIEW: “A visit to the verdant Irish countryside is marred by murder. The second in Gobbell’s travel series is filled with delightful descriptions of Ireland and offbeat characters…”

PUBLISHERS WEEKLY: “Fans of travel cozies will find plenty to like.”

Book One: Pursuit in Provence

A 1956 master tape of an Elvis Presley recording never released becomes the object of a chase through the French countryside. A small-time crook and a ruthless collector want it. A shady promoter in the music business wants it. A cowboy wants it. And they’re following architect and amateur sleuth Jordan Mayfair.

Excerpt from Pursuit in Provence:

I saw the steps to the tower in front of me and went up, up the curved, narrow set of steps that came out onto a view of the city. My heart was trying to leap out of my chest. Nowhere to go from here. What had I been thinking, heading up? It was the only staircase I’d seen. The view of the city was magnificent, so peaceful. What an incredibly peaceful place up here with the wind whipping, so high above the city that the street noise didn’t reach you.

And then he was there, as I knew he would be. He stepped up, breathing hard, too. He pointed his gun at me and took a step closer. I backed against a rail that felt insubstantial. Another step, and he touched the point of the gun to the soft hollow in my throat. With a horribly grotesque smile, the man who had pursued me and finally caught me said, “Would you like to fly?”

PUBLISHERS WEEKLY: “Seasoned with humor and evocative descriptions of magnificent historic sites, this whodunit should appeal to fans of both cozies and traditional mysteries.” 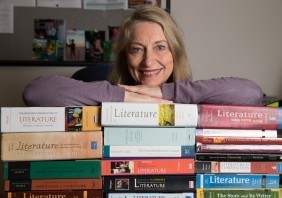 Phyllis Gobbell’s writing career spans four decades. Her history of publication includes both fiction and nonfiction, with a total of five novels and over thirty stories and articles in literary journals, anthologies, and magazines. One of her first stories appeared in the anthology, HomeWorks, in 1996, a collection of writings by Tennessee authors living at that time, including Alex Haley, Robert Penn Warren, and Peter Taylor.

Gobbell received the Tennessee Arts Commission’s Individual Artist Award in Fiction. Other writing achievements include the Leslie Garrett Fiction Prize awarded by the Knoxville Writers Guild, Tennessee Writers Alliance Short Story First Place Award, and the North Carolina Writers’ Workshop First Place Award in Creative Nonfiction. She received a Pushcart nomination for her story, “Primates,” which was published in Bellevue Literary Review. She won the Creative Nonfiction First Place Award from the Knoxville Writers’ Guild for her essay, “In the Car with Mother on Christmas Eve.” Twice she has received the Leslie Garrett Award for Fiction.

An active participant in the writing community, Gobbell helped organize the Tennessee Writers Alliance in 1990 and served on its Board of Directors for ten years, including two terms as president and one as chair of the Board. She was also a founding member of a writers group that still meets every Tuesday night, the Nashville Writers Alliance.

For twenty years, Phyllis Gobbell served on the English faculty at Nashville State Community College as Associate Professor. She taught courses in composition, creative writing, and literature. She served as editor of the literary magazine, Tetrahedra, for eight years.

Gobbell earned her B.S. in Education at the University of Tennessee, Knoxville, and received her M.A. in English from Austin Peay State University, Clarksville, Tennessee, where the graduate program offered a creative thesis option. Her thesis was a collection of stories entitled Listen to Me. Most of the stories have been published in literary journals and have received awards.